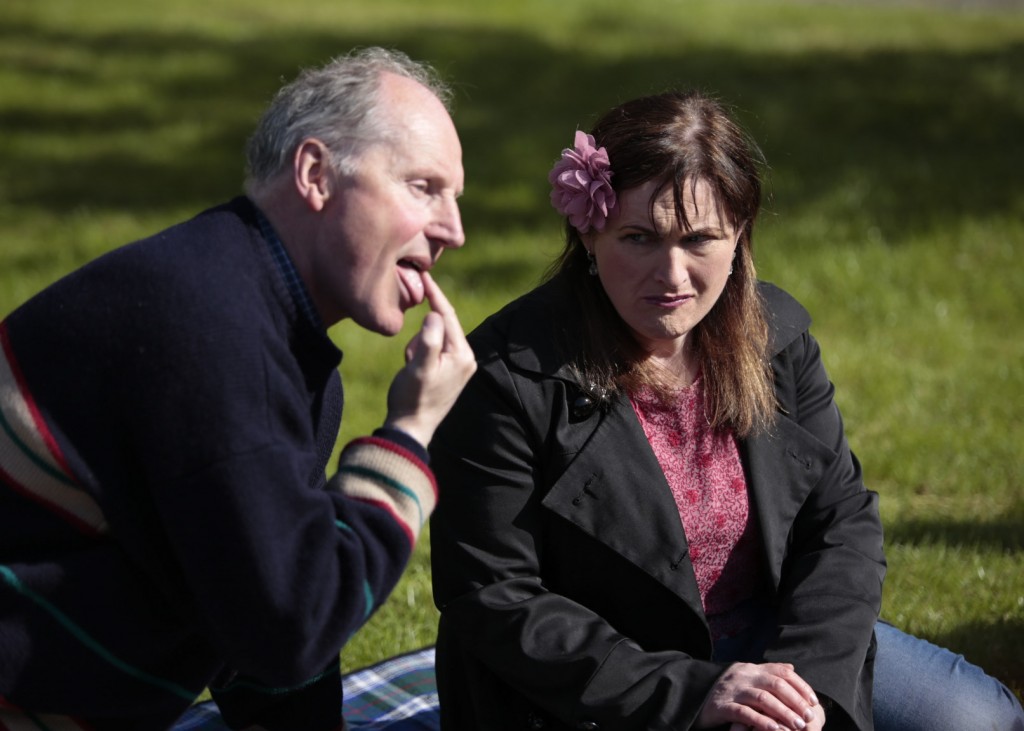 Michael Heavey and Geraldine McAlinden in Food of Love.

Online dating can be a bit dodgy at the best of times. During Covid it’s downright nuts. That won’t stop Dunlavin’s Paddy Moriarty from finding love though. Gloves – tick. mask – tick. Hand sanitiser – tick. But will Marie tick all his boxes? Will she measure up to his rather large expectations?

Forgiveness by Owen Fitzpatrick
Food of Love by Lorna Kelly-Dalton 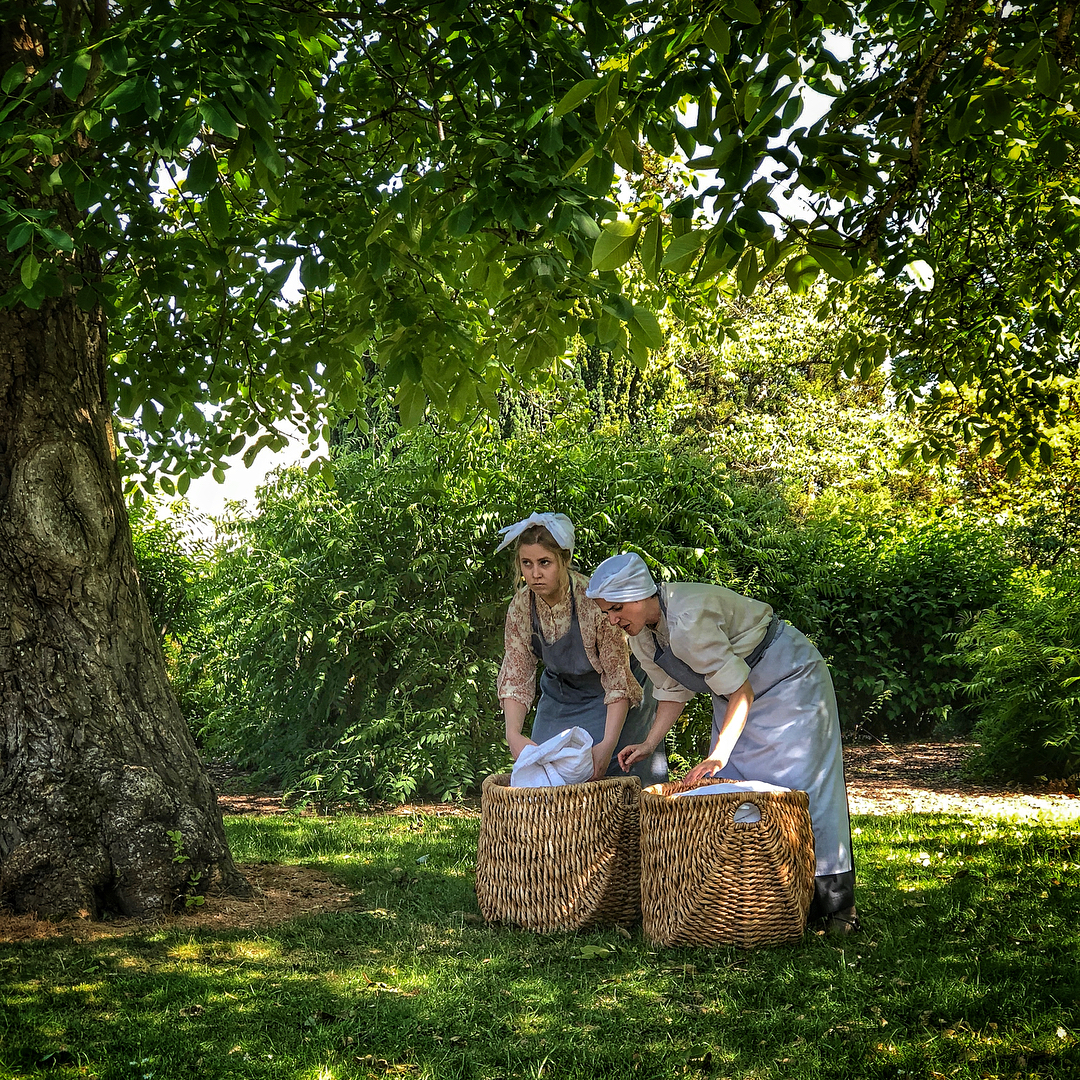 Will Medical student, Finn, be able to stomach digging up fresh corpses for Professor Trollope?
Will James expose Mary McCoy’s secret bustling side-business?
Will Molly’s date work out, or will it be back to the Tinder drawing board?

This site-specific production plunged us into the gripping 200 year history of Ireland’s National Botanic Gardens. Based on true events and real life characters, spanning the cholera epidemic to the onset of World War II. In association with the OPW and grand-aided by Dublin City Council.

Meet me in the Gardens, a series of four short plays, was performed in various locations
within the picturesque grounds of the National Botanic Gardens, Glasnevin, in July 2018. 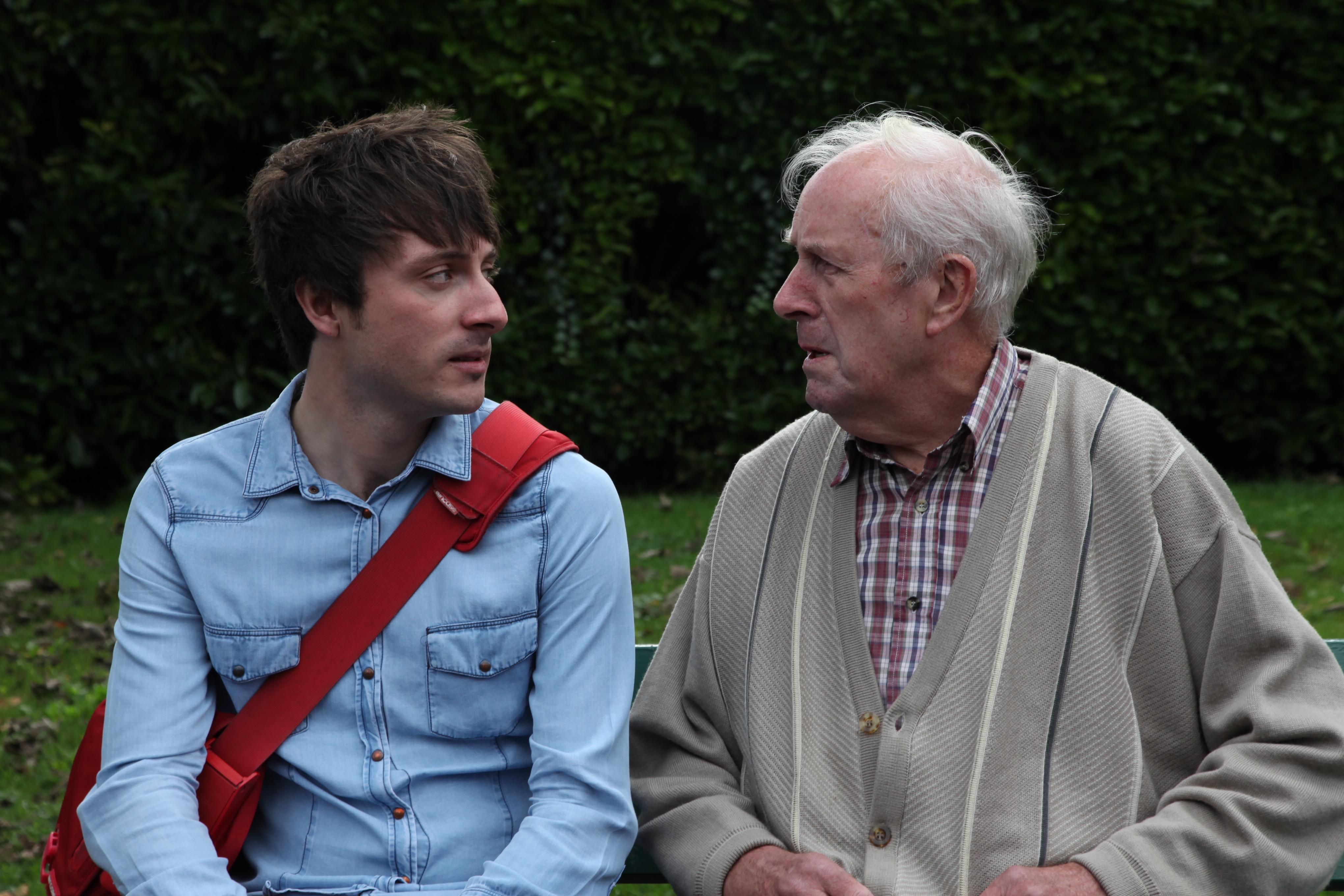 Angels in the Park was our second off-site production. We worked on this project from 2013-2016. It became an annual project which grew and toured to more venues each year. Angels in the Park started out as an experimental project for The Ranelagh Arts Festival, who supported its development from the beginning. Angels in the Park, an outdoor project, consisted of a series of 10-minute plays, all Irish premiere’s. Plays were set in a park and were performed outdoors, each play in a different location. At the start of the project we accepted international submissions, however, as the project progressed into its third year we decided to focus exclusively on Irish writing.

Shane Fallon performs in his play Across the Pond.

Performed in Ranelagh Gardens as part of the Ranelagh Arts Festival.

Cast (in order of appearance) 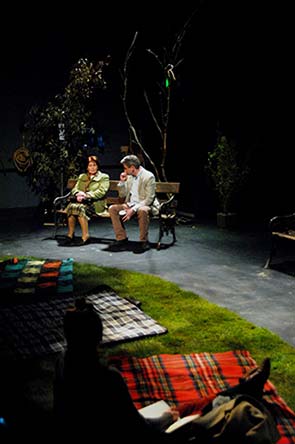 Margaret Toomey and Charlie Bonner perform Into the Mist by Karl O’Neill at the Axis (2014).

Cast in order of appearance: 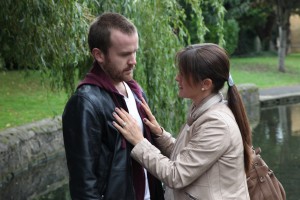 Performed in Ranelagh Gardens as part of Ranelagh Arts Festival.

Cast in order of appearance: 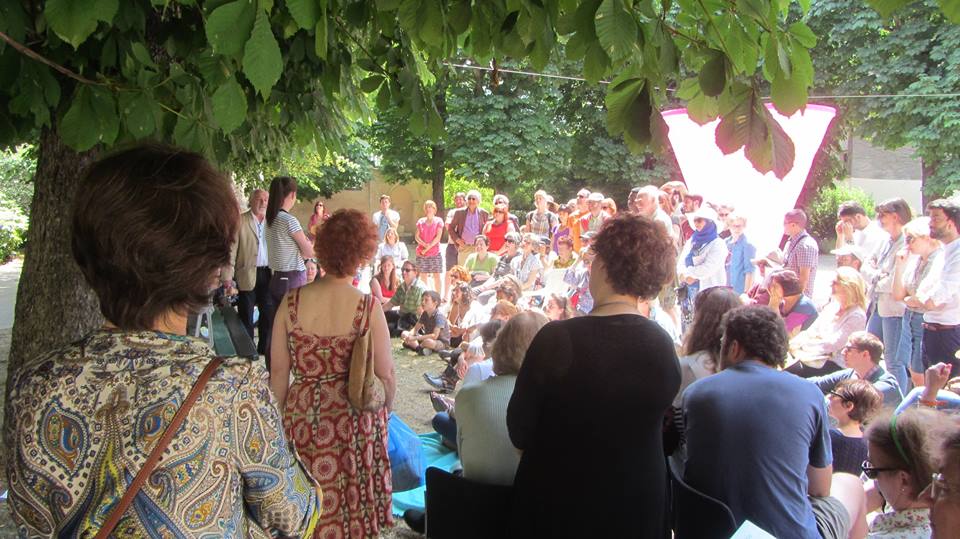 Charleigh Bailey and Joe Purcell perform Angels in the Park by Graham Stull at the Centre Culturel Irlandais, Paris (2015). 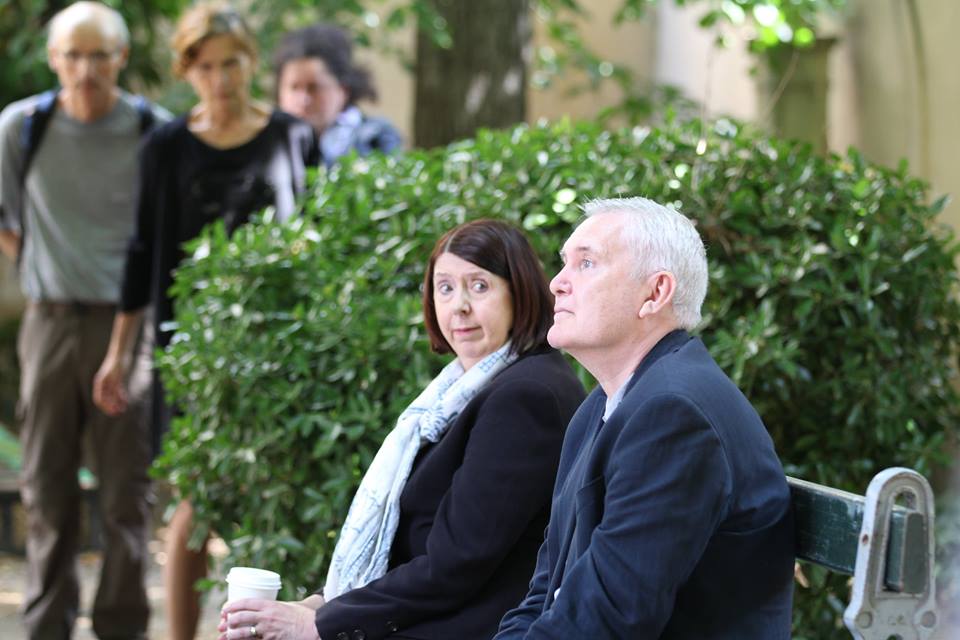 Rynagh O’Grady and Michael Sullivan in The Deal by Catherine Barry (Paris, 2015). 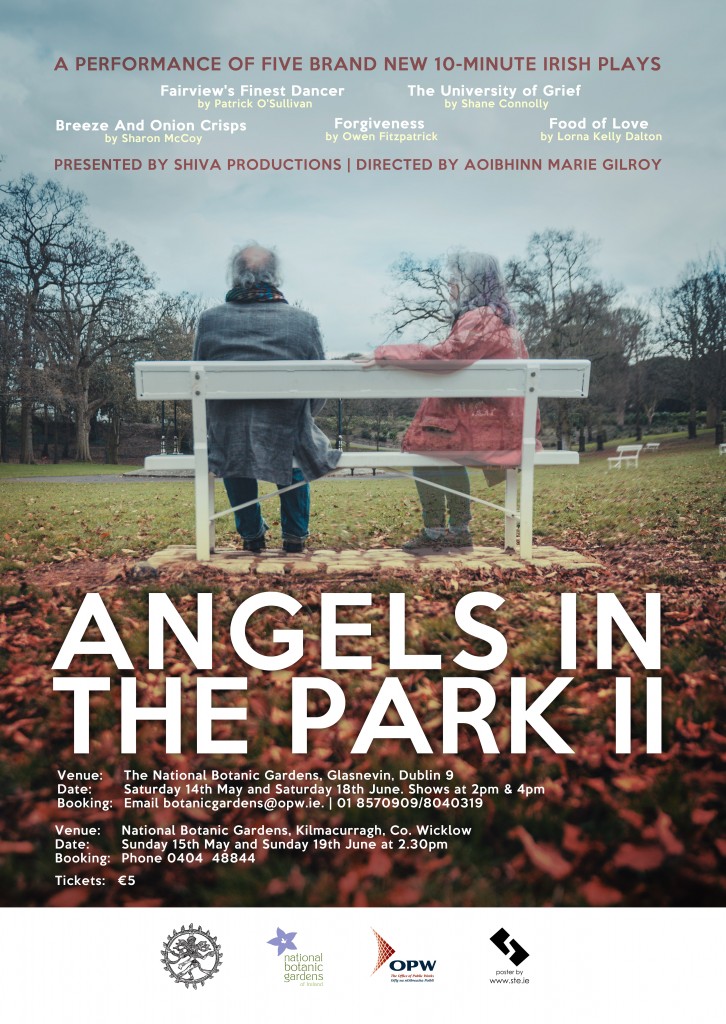 In 2015 we put out a national call for new play submissions for the 2016 Angels cycle, to present a brand new set of Angels plays for the first time since the project began. We received approximately eighty play entries, from which we selected five plays, all by new emerging Irish writers. Our final selection included: 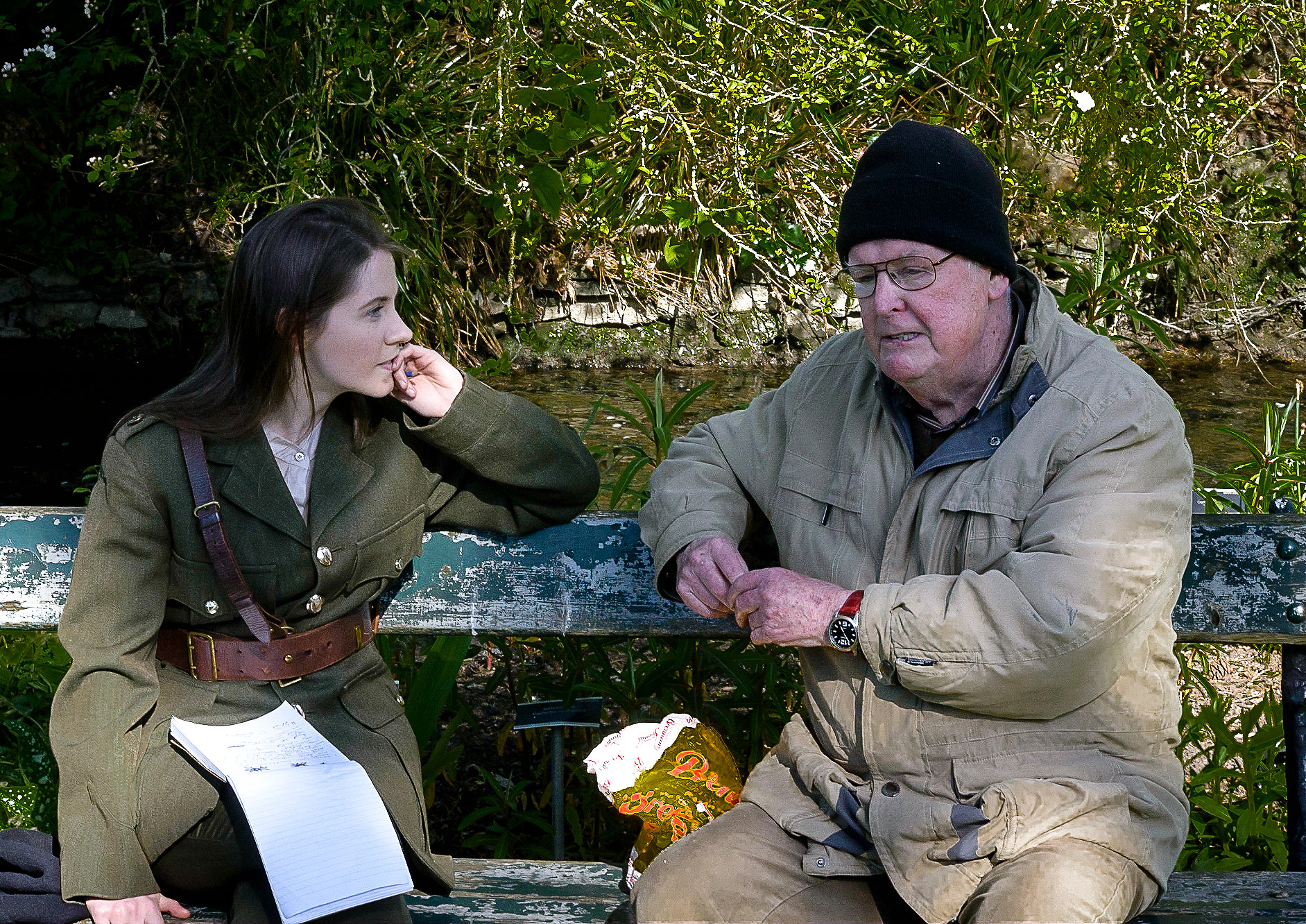 On 1st April 2013 Shiva in collaboration with Spanish artist Inma Chincoa staged a series of devised scenes around Cinnamon Café in Ranelagh unbeknownst to the public. The performance piece featured 14 actors and 2 classically trained singers, who communicated in various languages including Irish Sign Language, Spanish, Hindi, French and Italian. The project was explored universal body language and our ability to read and interpret it, even when we don’t understand the language spoken.

The following video’s are not footage of the original happening, but were filmed subsequently for our own records. We did not film these video during the happening, but after, as we did not want the public to realise until the end that the scenes were part of a performance. Following the scenes, two classically trained singers launched into a scene from La Traviata (sung) to a hushed café. 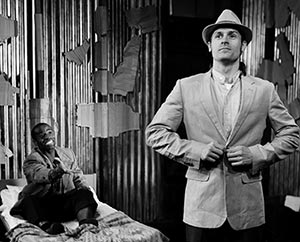 Shiva’s premiere production, The Blood Knot by Athol Fugard, was staged at the Project Arts Centre in June 2011.

Set in a dingy shack in Port Elisabeth, South Africa in 1961, the play explores the relationship between Morris and Zachariah, two brothers categorised differently during the apartheid regime.